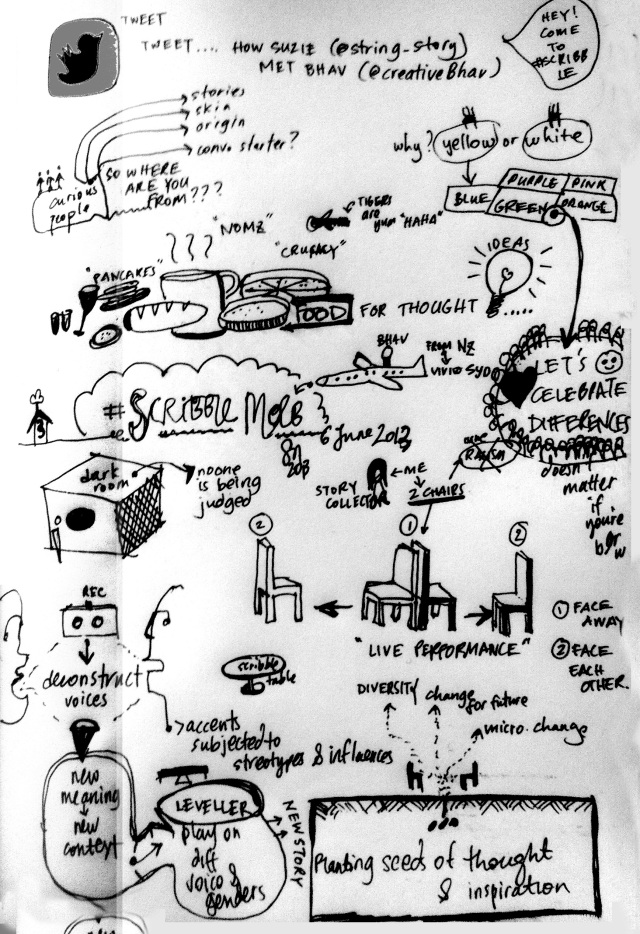 One twitter day, I received an e-introduction from a Sydney friend of mine, and that is how I first met Bhavesh Bhuthadia. He tweeted me and said he will be organising a #scribbleMelb. I rocked up to the night, having no inkling what I am getting myself into, and what an awesome night it was.

The theme of the creative forum was ‘Food’, and the event served an amazing banquet of food, from pumpkin soup to home baked bread. I met and made new friends, and I finally got to meet Bhav. Did I mention, he rocked up late by 1.5 hours to his very own event? Just like how I imagined him to be, gregarious, positive and lots of fun. He went around and made us played scribble games and allowed people to share their ideas. A chance to share my ideas and project – why not!?

In front of an interesting bunch of people, I talked about  The Two Chairs Project. People from all around the world, and diverse background broke down my ideas and asked me various questions. By the end of the night, I came out with more inspirations and ideas.

The drawing above is a result of the night.

Even though, #scribble started in Auckland, I hope it makes its presence more known in Australia, more specifically in Melbourne and Sydney. To share and collaborate ideas is always amazing.

← Racism is deeply embedded into our society
Q&A: The Two Chairs →