Why Are We Afraid of Peace? 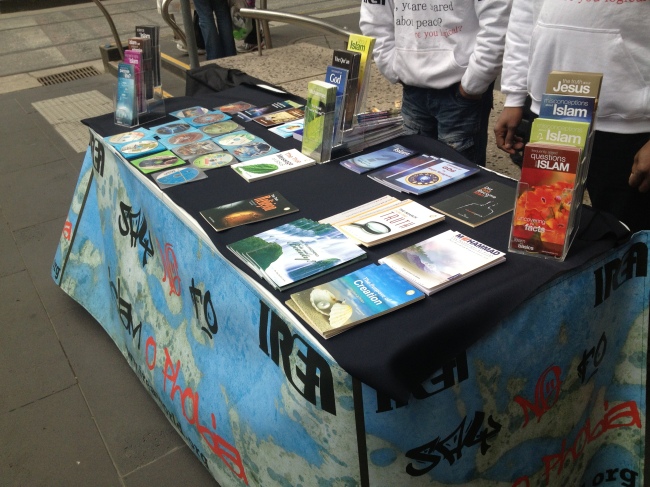 A few weeks ago I was on a tram heading down Swanston Street when I spotted a table on the corner of Bourke Street. From memory, there were two people at the table, nodding and greeting to the people walking by. The table was covered with the usual flyers and books. A banner sits at the front and advertised to “Say no to Islamophobia”. While their jumpers said “Islam = peace, phobia = fear” and “Why are you afraid of peace?”

I had two simultaneous reactions to seeing them there. The first was “You brave, wonderful people. Putting their selves out there and try to inform others”. The other response was “You brave souls, I’ll bet you’ve already received a ton of abuse”.

Less than 24 hours before this, the Federal Government had announced the most draconian immigrant policy seen in decades. Already people were posting on message boards about how glad they were that the “Muslim invasion was being halted”. There is not a whole lot of information in the public about Islam as a religion aside from what is seen on television from the more fundamentalist states. I resolved that when I got the chance I would pop in to visit their table and ask some of my more ignorant questions.

I managed to stop by this weekend after Open House Melbourne and spoke to Rashid and Rashad. It was really enlightening, and I learnt a few things from the experience. For instance: Islam, Judaism and Christianity share a common ancestry, and part of the Old Testament turns up in the Quran and the Torah, but starts diverging fairly early on.

The next question I had was about prayer and how Muslims are required to pray every day. You often see prayer rooms in common public buildings such as airports and libraries. I was curious to know if it was required that they held their praying ritual indoors or if it could be done anywhere. They confirmed that it was indeed done ‘anywhere’. Earlier that day they, themselves, just prayed behind the table.

For my third question, I told them I was writing for an anti-racism website, and asked if they had experienced any abuse as a result of their efforts on Bourke Street. They admitted that they had, including being told that they didn’t belong here (whether or not they meant that particular corner, or the country in general, that individual didn’t make clear).  They responded to say that it wasn’t too bad. Perhaps it’s the way they said it, while they may be genuinely happy to chat to someone who were openly and curious, it also told me that what they experienced so far was worse than anything I’m likely to go through in my lifetime.

I personally am an extremely lapsed Catholic, and been described as a humanist (where I have more faith in humanity doing the right thing as opposed to an all-powerful god). As a very rough allegory, Judaism, Islam and Christianity are like when characters from one television show guest star in another, and so people say that they’re both in the same world. These three major religions started off worshipping the same God. Then through people’s differences in interpretation and experience have branched out into different beliefs about the same God. Islam and Christianity have each had their own Prophet, while Jews are still waiting for theirs. There are obviously deeper divisions beyond that, but I always found that little fact interesting. Hopefully with more people like Rashid and Rashad out there, we can reach a stage where we’re closer through what we have in common again.

Guest writer: Dan Machuca
Follow on him @melbtown or see more of him at http://melbtown.wordpress.com/

← The Two Chairs: Tee Comp
10 Reasons Why Art is Valuable →