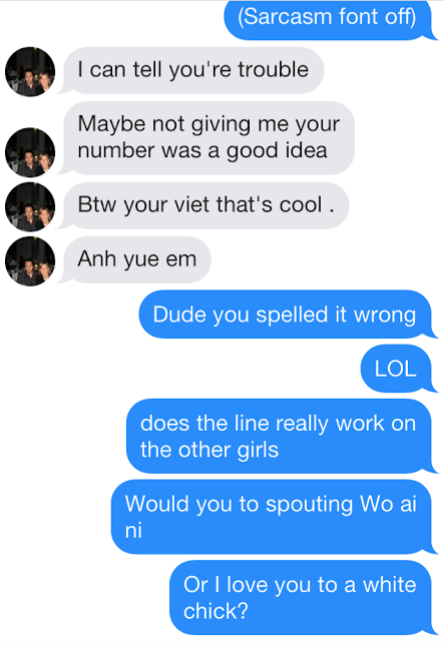 Even Asians can come off as creepy. No Exceptions at all

Never ever approach a random Vietnamese girl and say to them: Anh Yeu Em.

‘Anh yeu em’ translates to I love you in Vietnamese. It’s super creepy. It’s like a guy who thinks all Asians are Chinese and passing on the streets: Wo Ai Ni, which is equally as creepy.

It’s funny because it’s an Asian guy throwing the words back at me and he still continues to chat to me. OMG he also spells it wrong. Then he has a nerve to continue to say “I don’t know, I’m not from the Viet community.” Then I suggest that you don’t say it all creepy Asian guy. He doesn’t get it, ironically he doesn’t like coming across off an idiot.

The stoner-perve came back and said “Hi, I’m so scattered” really dude, that is so poetic. Unmatched. I don’t think anything worthy would be coming from him.

A friend introduces me to this awesome and gutsy artist. She crudely draws them a naked sexist alter ego. Why? Well, objectifying men who objectify women online, deserves to be objectified. LOVE IT

Friendzoned and Asian men being emasculated ?

I wonder to myself what it like being an Asian on Tinder. Then I noted, the amount of “Yeahs” I swiped came back with matches. ALL OF THEM. Is it because of my DP, maybe it’s because I’m a cute Asian or maybe guys would say Yeah to every girl? I think I need to spend a few days saying yeah to everyone and count up a tally –  A friend told me that he met a backpacker staying in a hostel, where the swiped yeah to everyone and came back with a quite a number of cougars wanting casual sex. Most of them are married. Travellers would use the app and find one night stands.

Learn to read between their collections of photos and go beyond the generic “Hi, how are you”

So one of my Tinder chatters’ is an Asian guy from Melbourne. A bonus is how he approached the conversation, he knows how to ask, engage and be sincere. We could learn something from this Melbourne guy: learn to read between their collections of photos and go beyond the generic “Hi, how are you” and if you’re really looking for interesting people, put up some interesting photos that goes beyond the bar and friends. You can actually read a lot and know the person based on their photos. Your interest, the type of friends you hang out with, are they all Asian or predominantly white, do they show anything next to them?

Then again, I am an observant kind of person and I like people. People also easily amuse the shit of out of me.

Eventually the Melbourne guy asks me for my Whatsapp and I thought “no: but I will make another friend. I facezoned him. haha I’m so terribly close to breaking my own rules again, BUT I haven’t met him in real life either. It’s fortunate that I’m not in Melbourne then ey.

I asked him: would he date a White girl?  he never thought to ask and he doubts they would accept. The conversation continued on Facebook and we had an epic chat about how Asian men are emasculated. He thinks it’s a good thing they come out and expose their thinking; it’s like a weed filter for ignorant and closed- minded fools.

There’s other spectrum too, I seen quite a number of men showing off their bods, which is fine but why do you have to be in a gym to do it. ewww

Whereas this dude below will only engage with you if you can hold a sentence. Hello your profile pic is a super deterrent, what girl in her right mind would really talk with you. 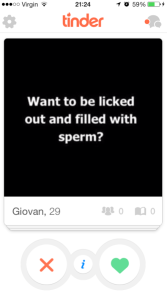 25 days to go, let there be more shits and giggles.