J-Obama* rocks up with his Obama tee for our meeting and sure enough, we start comparing Tinder experiences. He laughs at the amount of matches I have and lack of matches from his side. He shakes his head in disagreement and with a slight smile, he mentions how terrible it’s been for him. Despite it all, the 18 year old with an old man’s soul still continues to play.

J-Obama looks over my shoulders and swiftly says: “Yeah Na, he wants the D”

What starts off, as a simple exchange became an EPIC adventure of Tindering. For the next 10 hours and by pure accident; we played, trolled and laughed.

Our laughter isn’t a little ‘tee hee’ but a loud and mischievous cackling. Time really flies when one is having fun.

While we’re walking towards a bar in Surry Hills, I showed J-Obama another conversation and again he says: “He wants the D”

I’ve been hearing that statement repetitively from him all day and I finally asked J-Obama: “What exactly is the ‘D’?”

D IS FOR DOUCHE

The amount of douches that come out of the hood went through the roof. It must be a Friday thing, everyone leaves their hair out and become more loose. I’ve been playing for a couple of weeks and I am constantly surprised by the douchebaggery found on Tinderland. 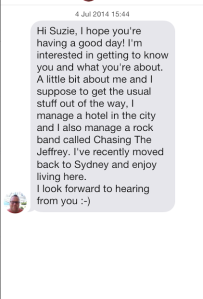 While not exactly a douche. He did the ‘copy and paste’ thing. I think he should join RSPV 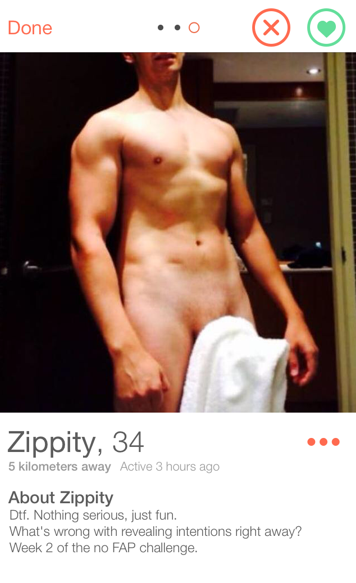 D IS FOR DICKHEAD

We met up with two others and at that point, J-Obama takes over my phone and begins to initiate the conversations on my behalf. Being surround by my guys friends, suggestions on how to respond to six match came from the right, left and centre. But I really have to hand it to J-Obama, being a guy himself; he knows how to trigger their response to make them go straight for ‘gold’. I gave J-Obama a challenge, to only speak in emoticons. Hilarity ensues.

And one word best describes the Emotion-Z, dickheadish. Even with cutesy pictures, he went for the kill. We indicated to Emoticon-Z that I am here for the weekend and that I ‘m from Adelaide (I’m not). Being keen, the Emoticon-Z starts delivering an amateurish erotica, one that I can describe as “50 Shades of Z”. (I know, I know. I have to show it to you, once I stitched the epic convo, I share it to you).

D IS FOR DINNER

We head off to a our next destination, a dinner and creative meet up. We kind of taken over and made into a Tinder Dinner. The whole discussion begins to revolve our Tinder experiment, J-writer*, adds in his own experience. J-writer has been Tindering for almost 1.5 years and finds the most common female name he comes across is Bronty. He finds it useful to learn different languages and uses it as way to engage and practice with various languages like Swedish and Spanish. Another designer shares her first horrid Tinder, where she engages in a match and had spent talking him for a few weeks. Eventually they met over dinner and she realises that the guy sitting opposite to her was a crazy lunatic. I think it made her hesitate to go on any further Tinder dates. It has become openly acceptable to use this app, the dinner has shown that Tinder has become the social norm.

D IS SHORT FOR DTF

I was sitting in the middle between my two new friends and showed them another EPIC conversation that probably is best described as catfishing. The two guys are close buddies and have never joined Tinder and they were utterly surprised by the desperado of Le’DTF*, a long blonde hair dude in his early 20’s. Le’DTF really jumped on the bandwagon and was keen to follow up with casual sex. So, I showed them a profile pic of the Le’DTF. At the same time, both chorused out: Hey I know that guy!

Seriously, what a tiny world we live in.